During the consultation process, there was a detailed analysis of two possible routes at Roseburn Terrace.

As the designs have evolved, there have been lots of compromises, most of which we support, to help other users.  Option B seems like a compromise that nobody wants.

— Main campaigners against the route

A is the best option. Full stop. But it's even best in purely political sense because all hate B and one side likes A.

Problems with Option B

The school is stuck in a vicious circle as parents drive children to school to keep them safe from traffic and so create more traffic which puts parents off letting children walk or cycle to school.
— Eilidh Troup, Roseburn Primary parent 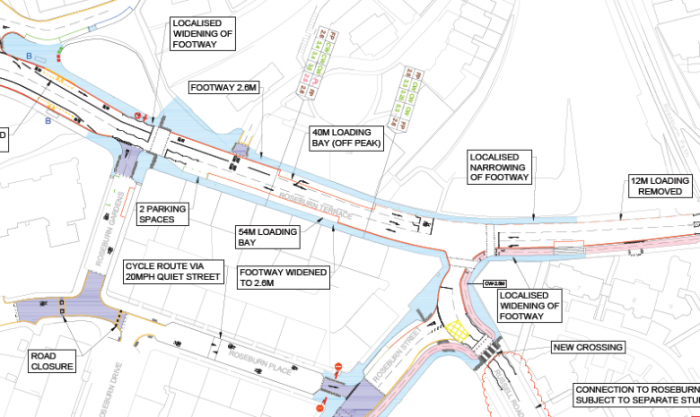 In its Creating Safe Spaces for Walking and Cycling paper from the Transport and Environment Committee meeting on... END_OF_DOCUMENT_TOKEN_TO_BE_REPLACED

May Traffic Count - Roseburn Park & the A8

The design proposals for Rejuvenating Roseburn have now been published and the Council is asking for input from the community.... END_OF_DOCUMENT_TOKEN_TO_BE_REPLACED

We are the “Roseburn Cycle Route Support Group,” a group of local residents working to promote good-quality cycle routes in Roseburn and Murrayfield.

We've spent hundreds of hours gathering the facts about the West-East Cycle Link.

To join our Group please contact us — membership is free

Our site is evidence-based, including the disadvantages.  We are ready to engage in discussion with anyone.  Tell us about errors or omissions and we'll fix them as soon as we can. END_OF_DOCUMENT_TOKEN_TO_BE_REPLACED